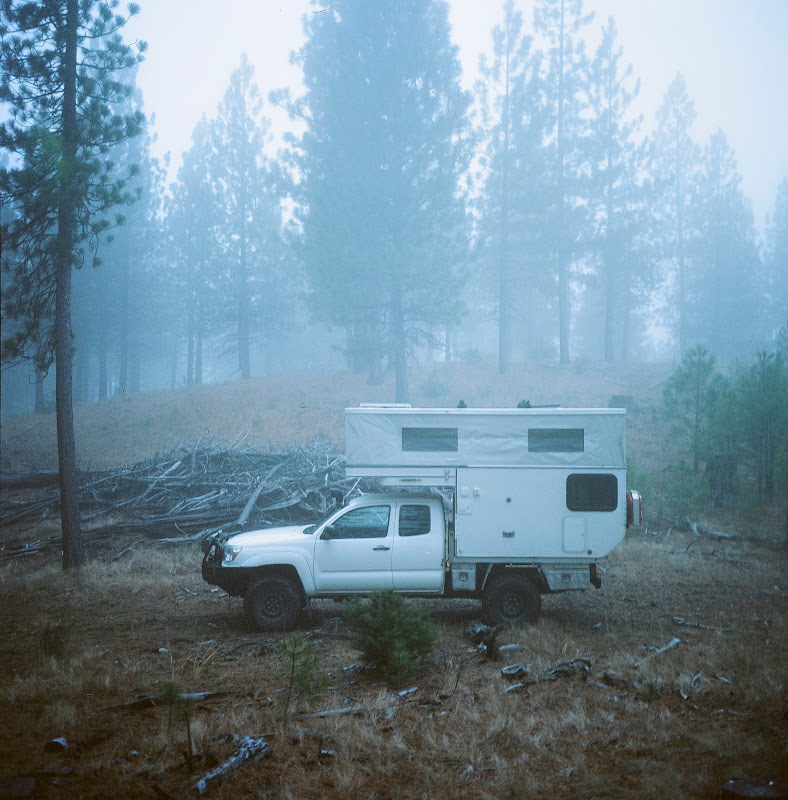 A year ago, I started fantasizing about campers other than my VW Syncro.  It felt adulterous. I had been living in it for a year and half at this point and the cost of maintenance was catching up to me.   Syncro’s are pretty amazing vans.  Mine had an Audi engine, front and rear locking differentials and could go any where I wanted it.  The problem was reliability.   Only 300o were ever imported to the US, and very few people know how to work on them.  Many times a minor break down such as a fuel pump or a starter turned into a week long search for a mechanic that was willing to work on it let a lone had access to the right parts.  My van was made in 1987 and had 292 miles on it when I bought it.  With the right maintenance,  It will keep working forever,  but my regiment of 40k miles per year were wearing on the car.  From afar, VW van’s are very romantic.  Living in one is a totally different story. 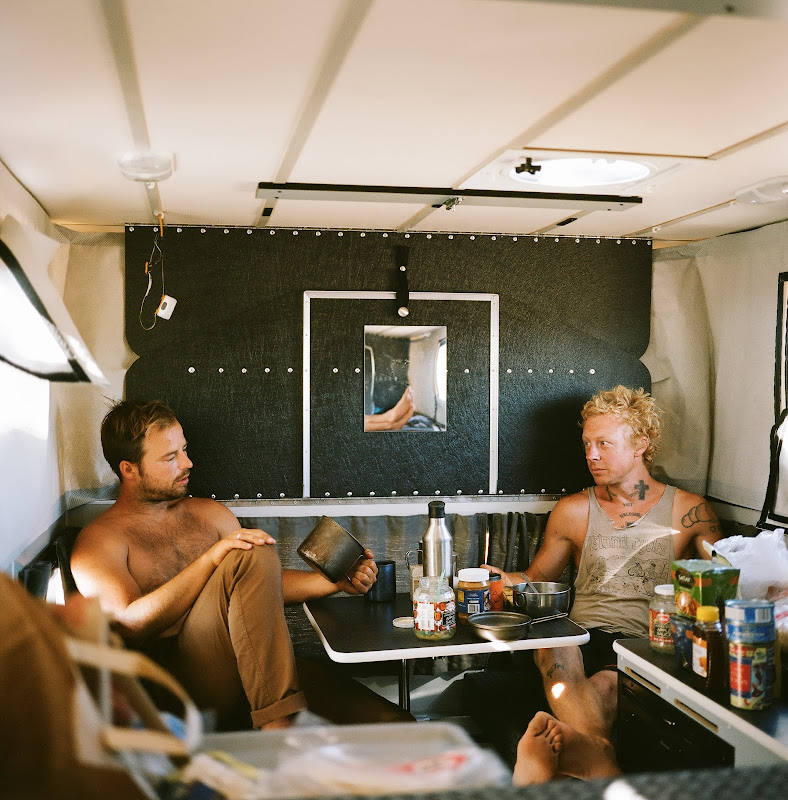 Unfortunately, there aren’t that many good alternatives to a Syncro in terms of capability, size and efficiently.  Sportsmobile’s weigh twice as much and cost between $50-100k.  Depending on the, year there are problems with the Diesel engines and the MPG are hard to swallow.  Eurovans are plagued with electronic issues and never come in 4wd.  A full size truck and camper is way to big. I wanted something, I could parallel park in a city and make my way around narrow forest service roads. Eventually, I settled on a Toyota Tacoma and a poptop camper. 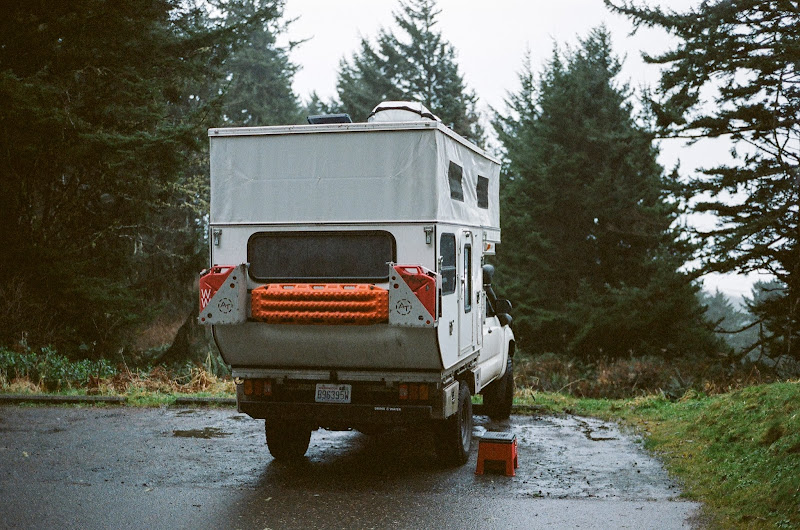 Go to a remote area for an activity like surfing, snowboarding or climbing and you’ll likely see a Toyota truck with a pop top camper.  Unlike a rare German 4×4, the parts are ubiquitous and any garage in the world can work on them.   Sure they aren’t as “c00l” as a VW, but one break down in the Mojave desert cured me with my fixation of how cool my Syncro was. 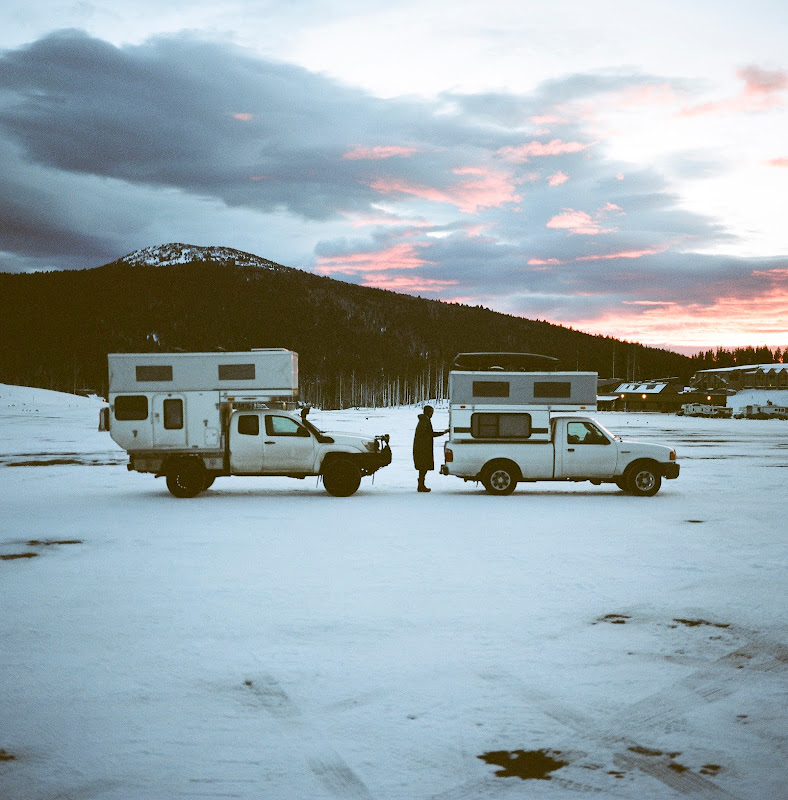 After doing a bunch of research on forums like Wander the West and The Expedition Portal, I focused my attention on a Four Wheel PopTop camper.  All though not the fanciest,  they have been making campers for 40 years and have a cult following of people that use theirs in harsh situations.  To maximize usable space,  I decided to remove the stock bed and put an aluminum flatbed on the truck.  This would allow for the side entry I loved about my van, as well as a lower center of gravity and increased storage around the wheel wells.   On a tip from a friend,  I got in touch with AT Overland in Prescott, Arizona and they helped design, source parts and work with Four Wheel to build the camper.  The whole process from conception of the idea to delivery of the finished product in Prescott took eight months. 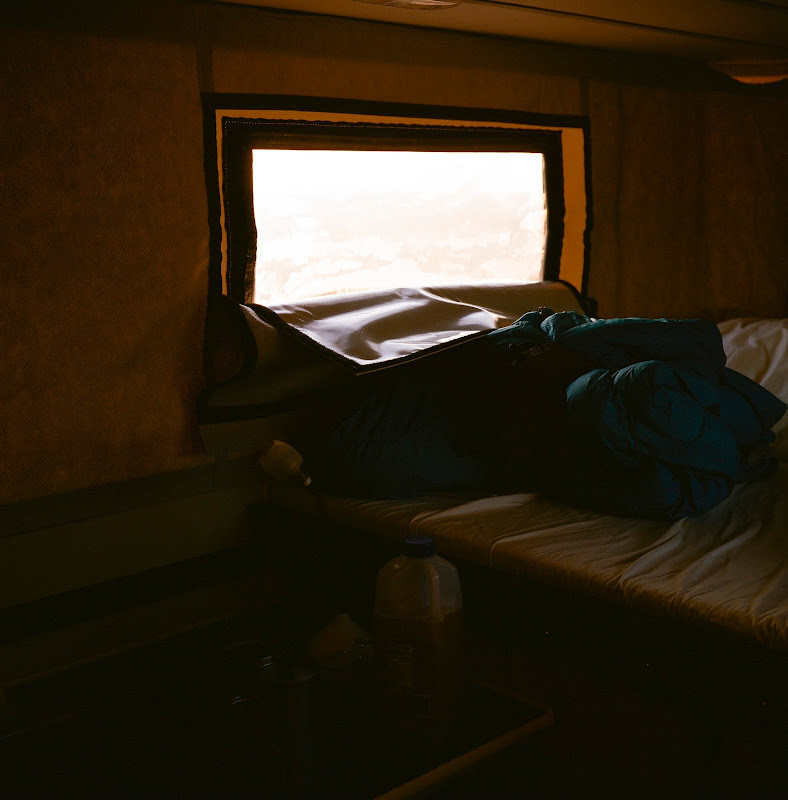 The ruberized canvas walls have an insulative layer that helps with condensation and keeps the camper warm in cold temperatures. 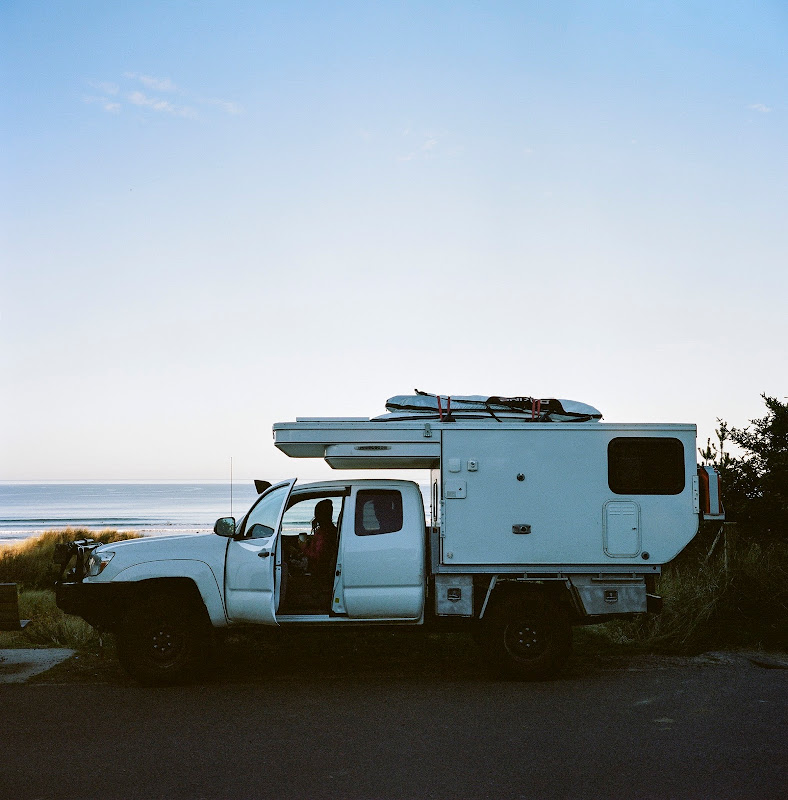 The camper is based off of a 2013 Toyota Tacoma Access Cab.  The truck has a V6, six speed manual and the off road package.  I upgraded the truck with a 2-inch lift from Old Man Emu, an ARB Bumper, Warn Winch,  Airflow Snorkel, Firestone airbags in the back and a custom rear leaf set up from Deaver in Orange County. 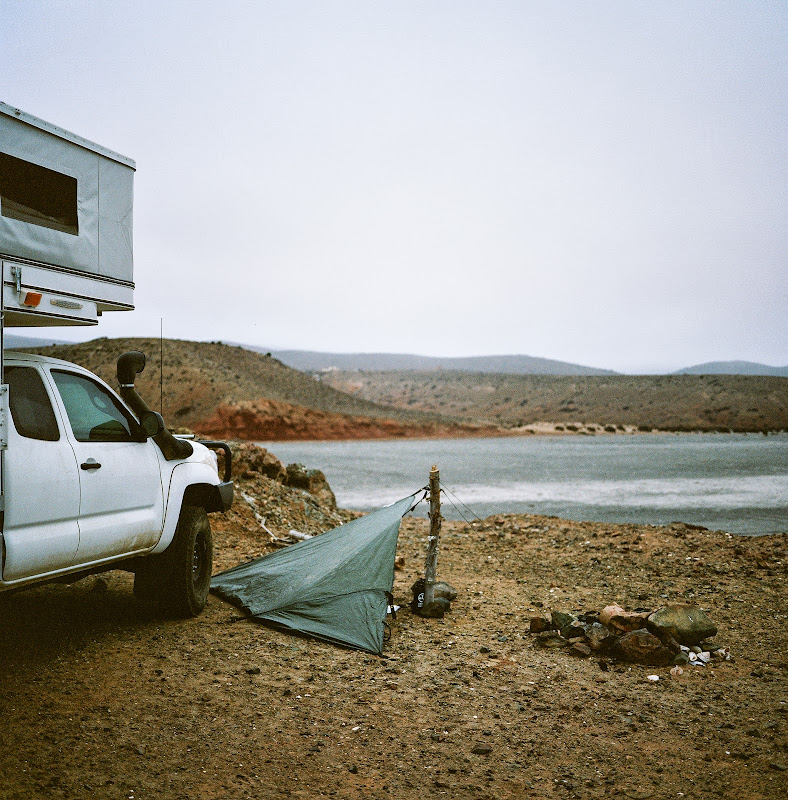 Parked in Baja on the campers maiden voyage last summer. 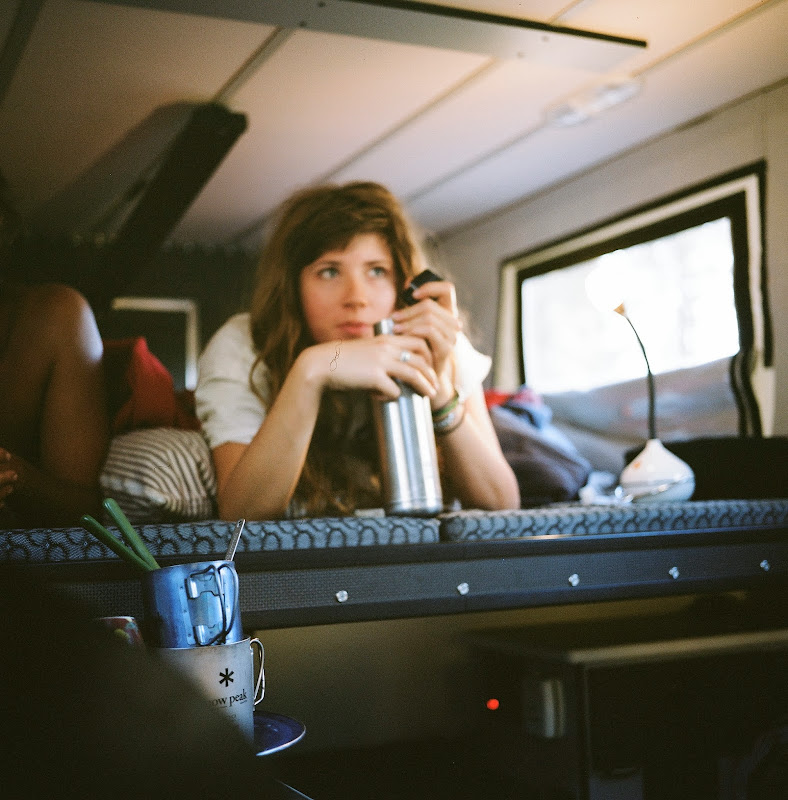 When popped, the bed slides out to roughly the size of a Kingsize. 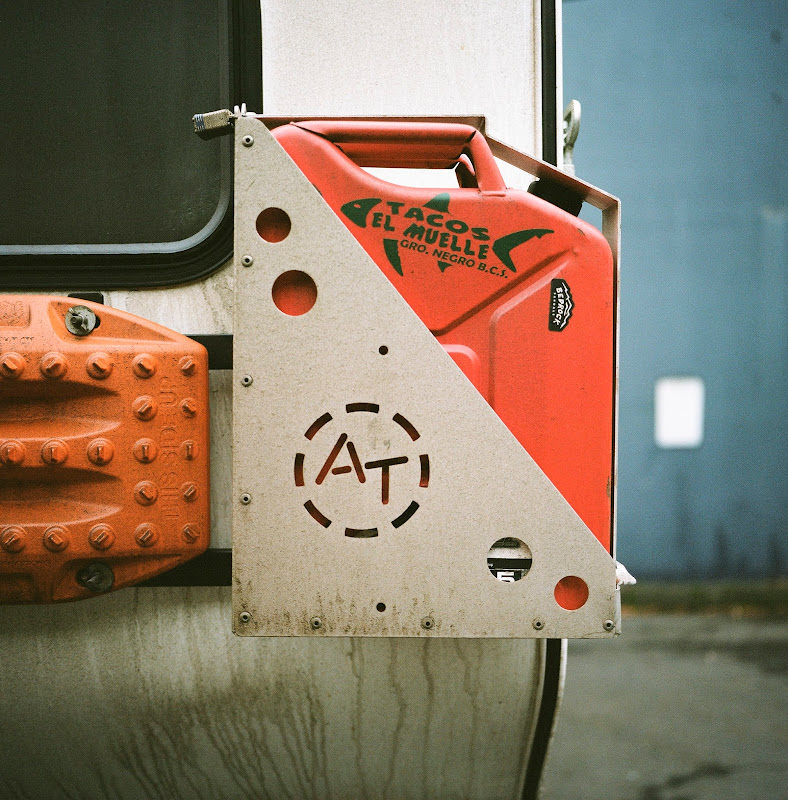 Extra fuel storage and some badges of honor from the road. Between the fuel cans are two Max Trax for putting under the tires in sticky situations. 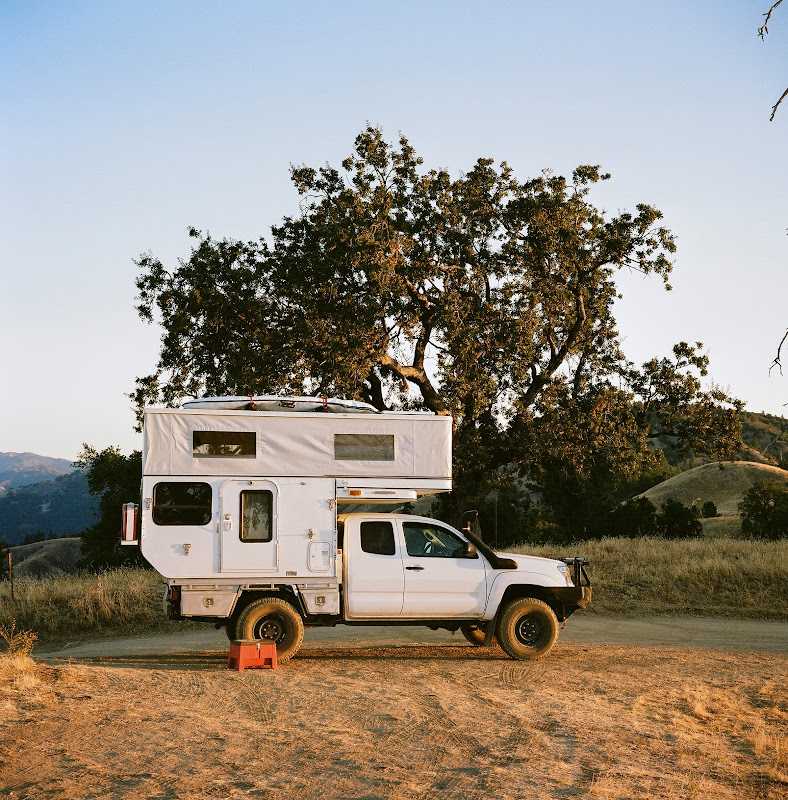 AT Overland fabricated 4 Lockable aluminum boxes under the flatbed for extra storage room. 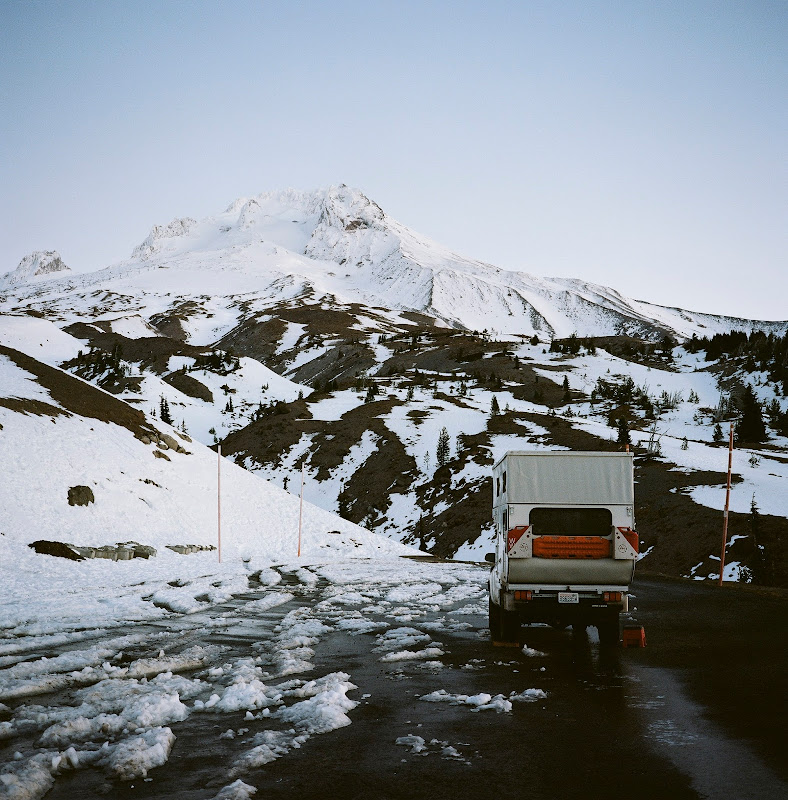 A 20,000 BTU furnace keeps me the camper warm during cold nights.  This opened up a ton of possibilities for me. 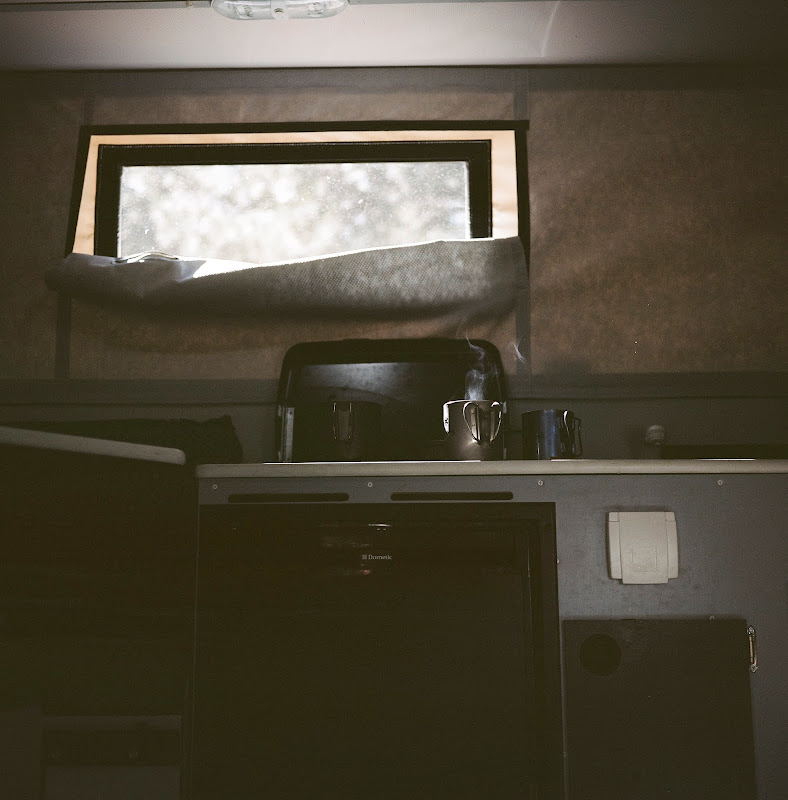 Compared, to my Syncro, the Four Wheel Camper feels like a Four Seasons.  It has an electric fridge (powered by two marine batteries and 160w panel) a two burner stove (two 10 pound cylinders) a furnace (runs off the propane and 20 gallons of freshwater and an outdoor shower. 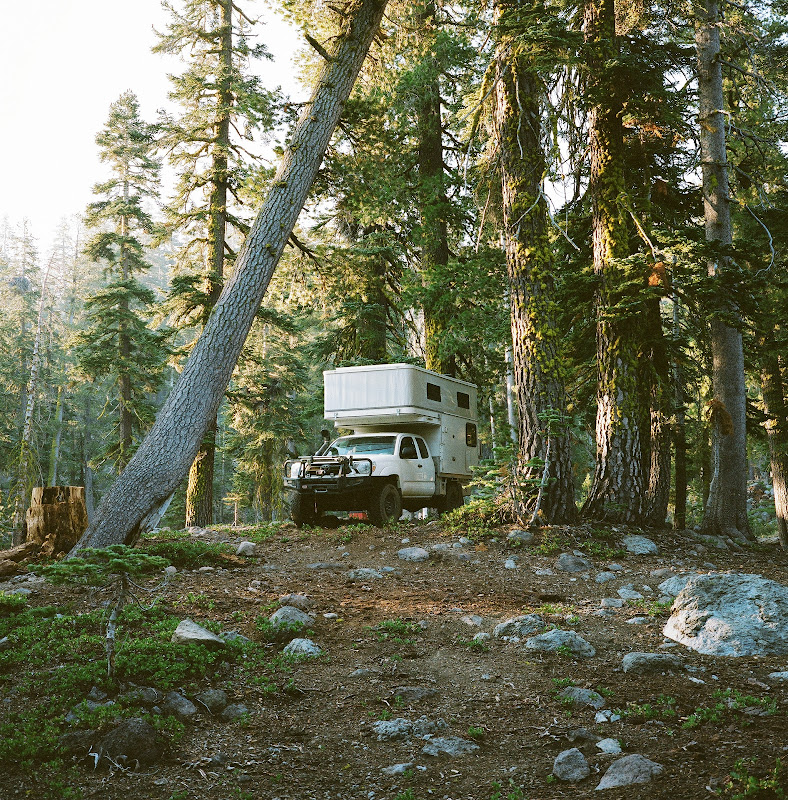 This month marks the two and half year mark for living out of my vehicle.  It’s flown by.  My initial plan to spend a year on the road has morphed into a way of life.  I love living out of a small space.  It forces me to limit my possessions and conscious of the mess I make.  Instead of buying something when I’m bored,  I travel to a new place.  My new camper gives me piece of mind to continue my travels .  I’m hoping to have it for twenty years.

Here are some more links,